Posted on December 2, 2012 by bubbleheadgunnut

With a funshow just around the corner, I am torn between looking for AR build parts and more Milsurp firearms.  I am such a sucker for old military guns and right now, I have a serious itch to get a sidearm to go along with Nadya, my M-44 Mosin Nagant.  I came up with a possible list of Combloc pistols:  Nagant revolver, Makarov PM, CZ-52, and Tokarev TT-33.

Next up, the Makarov PM.  I like this iconic little gun a whole lot and I will most likely own one in the future.  Even though it is a blatant copy of Carl Walther’s Model PP, I find it’s Soviet makeover rather pleasing.

Reliability is good, ammo availability good, muzzle energy is a step up from the Nagant revolver, but I think that something firing the Glorious 7.62x54r requires a sidearm that fires an equally impressive cartridge.  Enter the 7.62x25mm Tokarev.  This cartridge launches an 85gr .30cal pill at 1675fps according to Sellier&Bellot.  This equates to 529ft-lbs of muzzle energy or in other words, it’s freaking moving!  This stuff has been known to go through level IIIA kevlar armor using who-knows-however old surplus ammo.  Hollow point ammo is available which would make this a devastating round for defensive purposes.  Now that we have settled on a cartridge, we need to decide the platform.  The CZ-52 is a very interesting pistol, utilizing the roller delayed blowback action of HK/CETME fame.  I really like this pistol and from all accounts I have read, it is a solid gun, built like a tank and has been totally reliable.  The fact that the CZ model 52 was produced the same year that Nadya was born gives it an extra coolness factor. 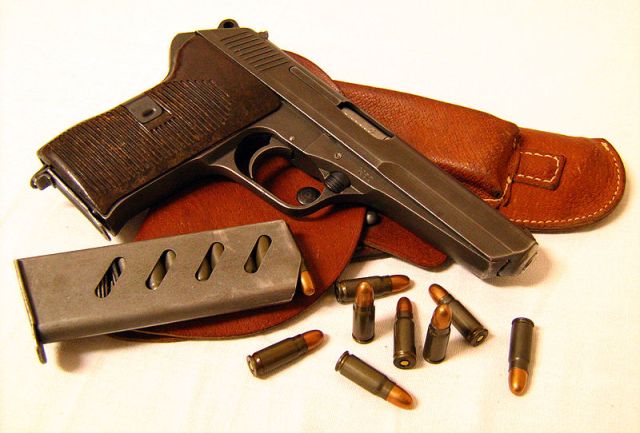 The other pistol, the one the 7.62x25mm was originally made for, is the Tokarev TT-33.  As the name implies, Fedor Tokarev designed this fantastic pistol to replace the aging Nagant revolver.  The cartridge was little more than a higher pressure 7.63 Mauser round.  Fedor used features from John M. Browning’s 1911, most noticeably is the short recoil linked barrel mechanism.  The Tokarev TT-33 is a slightly updated TT-30, Fedor’s original design, and during the cold war, many other Combloc countries made copies of this pistol.  China, Yugoslavia, Romania, Egypt, North Korea, Hungary (chambered in 9mm), and Poland.  The original Russian ones are a little difficult to find, but Romanian M-57s are fairly prevalent.  Hopefully I can find an origianal or decent copy at this coming gun show, but if not, I might hit up Cheaper than Dirt or J&G sales.  Nadya needs a pistol companion.  In the meantime, I leave you with some pictures and a video from one of my favorite YT channels. 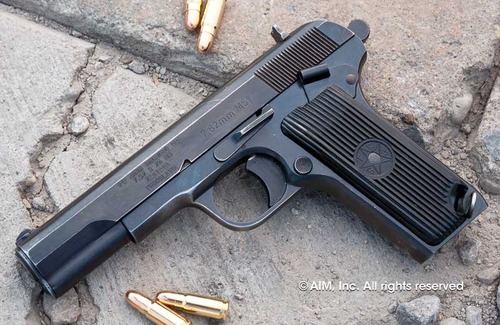 Hat tip to  Moist Nugget for that last one.

That’s all for today, wish me luck in my search.