Posted on April 11, 2013 by bubbleheadgunnut

I took Scarlett out today to sight her in and I also managed to haul out some ballistics testing media to finish up the Tokarev review.  Nicoleta (Victorious People), my 1953 Romanian TTC is an awesome little package and is fast becoming one of my favorite guns to shoot. 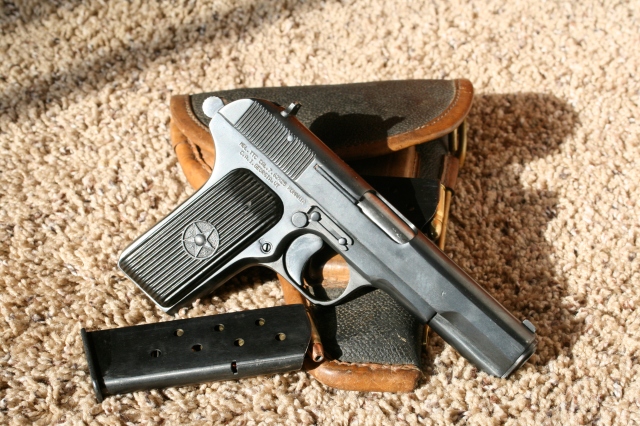 Designed in 1930 by Fedor Tokarev to replace the aging 1895 Nagant revolver, it served as the standard sidearm for officers, rear echelon troops and even some postal workers of the Soviet Union until it was phased out by the Makarov PM.  Over 1.7 million of these pistols have been made by Russia, Hungary, Yugoslavia, Poland, North Korea, China, and even Egypt.

Weight: 30.1oz  Length: 7.6″  Barrel length: 4.6″   Height: 5.3″   As far as fit and finish, she is just like many of the military arms of the time from any Soviet country, in that it is decent but could be better.  The quality of construction is excellent, striking me as very robust and mechanically sound.  This is mostly due to the design, taken in part from John M. Browning’s 1911 and 1903 pocket hammerless.  The lockup is carried out by means of a set of barrel lugs and slide channels that interlock utilizing a link under the barrel to disengage after 1/4-3/8ths of an inch of slide and barrel rearward travel.  In short, a copy of JMB’s 1911, with the only difference being that the barrel has these lugs machined all the way around for manufacturing simplicity.  The outside looks of the pistol closely resemble the Colt 1903 pocket hammerless, just with a longer barrel, barely exposed hammer spur and lanyard loop.  Another interesting feature is that it has the magazine release in the newer “American” location in the grip at the base of the trigger guard instead of the heel type favored by most Eastern militaries of the time.  The whole gun has a dark bluing and plastic grip panels that not screwed to the frame, rather, they use rotating clips on the inside of the magazine well.  This makes them slightly more difficult to remove but a little patience and finesse will get you there.  Sights are standard military garbage of the time, milled front sight on the slide and a simple notch rear dovetailed in.  They are small, but capable of very good accuracy.  The only safety, per design, is placing the hammer on half-cock which locks the slide and the trigger is rendered useless.  Mine has been fitted with a simple up-safe, down-fire, switch on the port side behind the trigger and under the slide stop.  This was added for importation requirements only and simply blocks the trigger, not the hammer or firing pin like on most current handguns.  I do not trust it for carrying with one in the chamber and if it didn’t leave a huge hole in the frame, I would have removed it.  The magazine holds 8 rounds of 7.62x25mm Tokarev and both of mine that came with her, drop freely.  An interesting reliability feature was designed in the form of two machined feed lip guides inside the frame.  Way to go Fedor Tokarev, good idea for any military sidearm if you ask me. 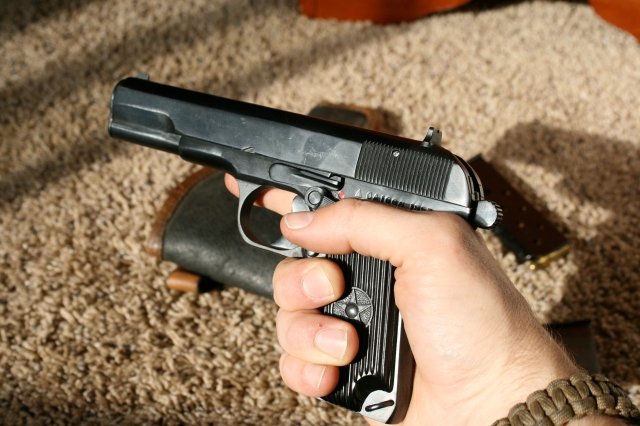 Those last two were the reliability feed lips.

This was my first experience shooting anything in this or a similar caliber and I was not prepared for the ridiculous lack of recoil compared to even a 9mm.  That’s what you get when you are only launching 85-100gr projectiles.  But where she really shines is the speed at which these pills leave the barrel.  We are looking at 1400-1500fps for most loads out there which will get you 370-499 ft-lbs of muzzle energy.  To put that in perspective, most 45acp 1911s push a 230gr slug at 850-900fps which yields a muzzle energy of 369-414 ft-lbs.  Not only is the Tokarev more powerful, it delivers this energy with a whole lot less recoil than a .45 1911.  Plus you get a massive fireball with the Tokarev, contributing at least 30 extra points to your CDI (Chicks Dig It) factor.  For testing, I scrounged up 3 different loads:  Fiocchi 85gr FMJ, 1955 Polish surplus 85gr FMJ, and Reed’s Ammo 100gr Hornady XTP JHP.  The latter is pushed to 1500fps and, as described above, brings us to 500ft-lbs.  Reed’s makes some nice ammo, using Starline Brass for everything they sell.  The trigger is heavy (~8lbs), has significant over travel, the grip feels good in the hand despite being a little short and the sights pretty much suck for quick sight alignment.  The grip angle is like nothing I have ever used, halfway between a Glock and 1911.  Despite all this, all loads grouped very well at 10yds and I had no trouble keeping them all within 4″ as long as I did my part.  Important note, all military surplus ammo for the Tokarev is corrosive and requires proper cleaning afterwards to neutralize the salts so that it doesn’t rust out and pit your barrel.  I cannot put to words what a sheer joy this little gun is to shoot.  It’s loud, shoots fire, doesn’t recoil, and packs a serious punch.

I mentioned earlier that I made some ballistics testing media (aka wet newsprint in a can) and captured one of the Reed’s ammo JHPs.  The surface “wound” in the newsprint was about 1.75″ in diameter and the round penetrated to 7.375″.  The wound channel was a simple elongated cone and it actually blew the top 50-75 layers of print out of the can.  The recovered bullet weight was 94 grains and expansion was .507″ at the widest point and average diameter was .483″.  Now the penetration depth is not to simulate human flesh, rather it gave me a comparison between this and a Federal 9mm HST shot into a similar can-o-wet-newspaper.  The 9mm drove down to 6.5″, expanded beautifully, and left a respectable wound cavity.  The Tok beat the pants off the 9mm in terms of depth, and wound cavity, but the modern 9mm definitely took first prize in expansion coming in at .716″ widest point and average of .694″.  Tnoutdoors9’s youtube channel performed an IWBA protocol gelatin test with the 9mm Federal 124gr HST +P, similar to the load I used.  Here are his results:  14.75″ penetration, .602″ max exp, .591 avg exp and 122.8gr retained weight. 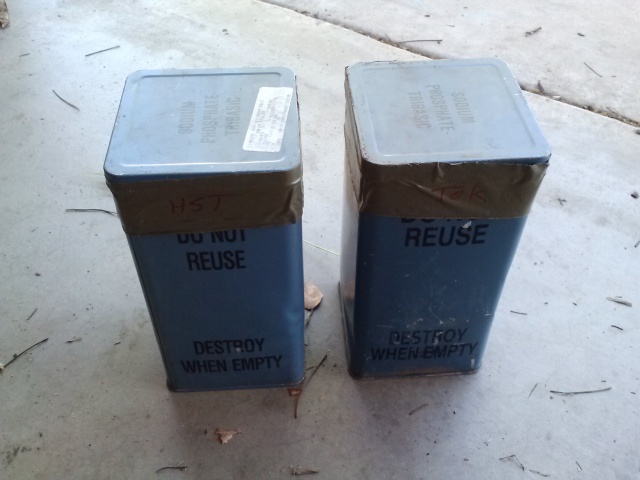 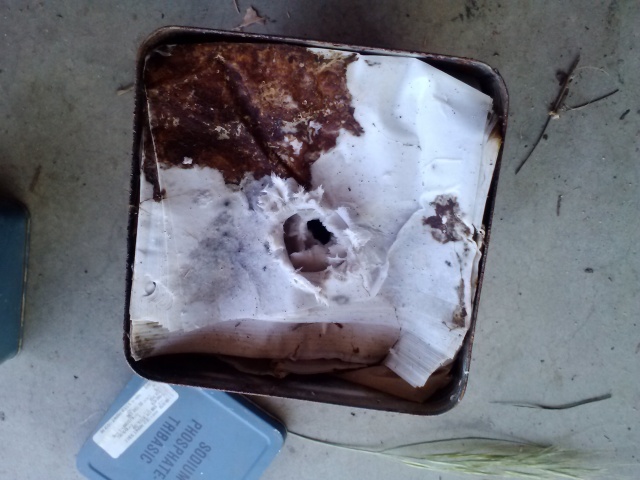 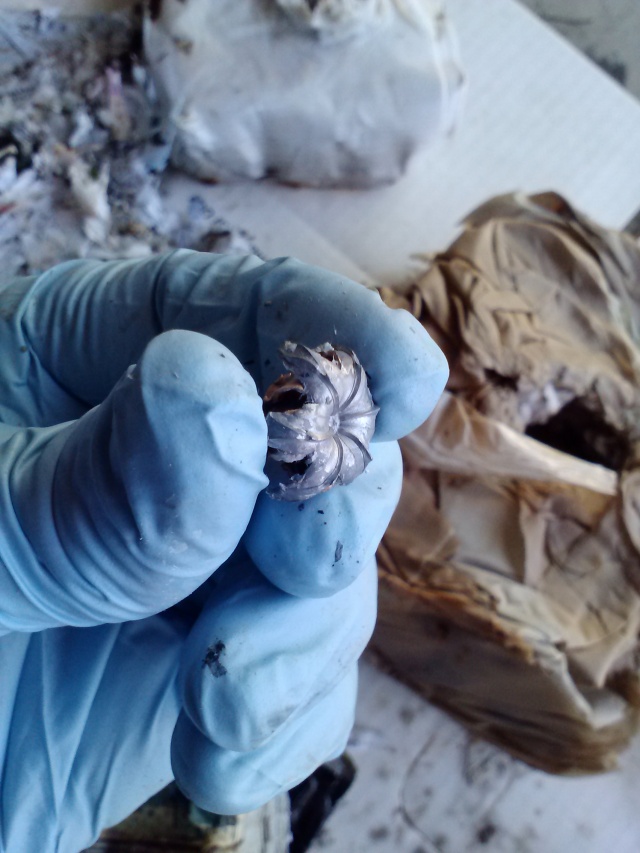 What can I say?  I love Milsurp guns, especially Russian ones.  This one did not fail to please me and I can’t wait to start reloading for it so that I can shoot it more.  If you can find one of these, I highly recommend picking one up and at $300 or under, it’s not a bad choice for a fun and/or defensive handgun.  Many a dead Kraut soldiers can attest to that.  Hope you enjoyed this review, keep your eyes open for the STUPID carbine project, she’s coming home in a few days and I will give you a thorough tutorial on how to de-cosmoline an old war-horse.

This entry was posted in Uncategorized and tagged 7.62x25mm, Tokarev, TT-30, tt-33, TTC. Bookmark the permalink.